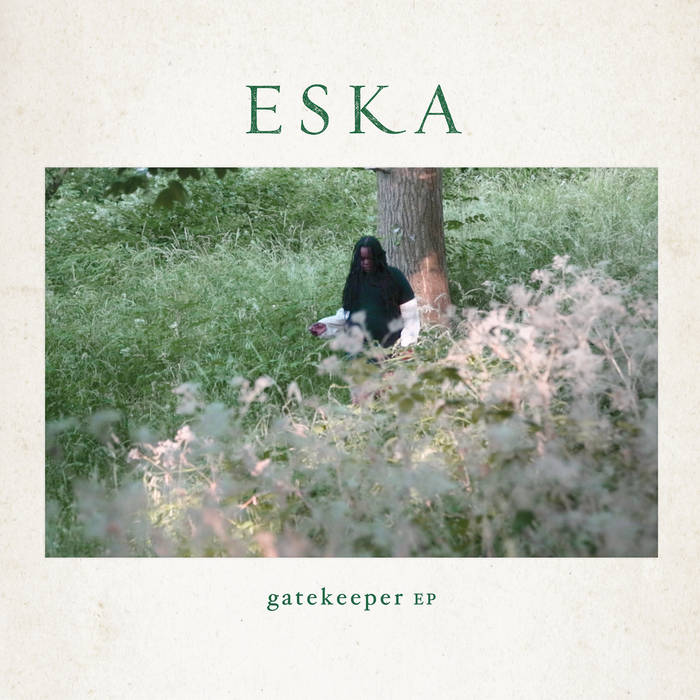 M.D.L. ESKA has a unique voice and phrasing, and the music has a refreshing sound that's hard to slot into any one category but good. Favorite track: Red.

Nemo Halperin Eska does folk, and folk me is it good! This indelible EP is beautiful in it's range and depth. Essential. Favorite track: Red.

Simon Daley ESKA finds just the right balance between Soul, Folk and Jazz on this EP! It's crazy to think that this is her debut project, the future is looking bright! Favorite track: Red.

flake Hadn't finished listening to the album before I bought the vinyl, it's just so obviously a classic. ESKA is a hugely talented artist.

All Tracks Written by: Eska Mtungwazi (copyright control) Except -

All Tracks Produced by: ESKA & David Okumu Except -

All Tracks Mastered by: Mike Marsh (The Exchange)


ESKA is the most talked about, revered, internationally known singer you've never heard of. Prepare to be let in on one of music's best kept secrets this November with her 'Gatekeeper' EP, the first ever release of her solo material.

Possessing one of the best and most memorable voices in the UK right now, ESKA weaves together diverse musical elements - hints of folk, soul, psychedelica and electronica can all be heard on 'Gatekeeper' - and pairs them with stirring lyrics, born from burning passion, which traverse scenes from church stories and rituals. With this debut release, ESKA has created something pure and timeless which echoes past traditions while at the same time managing to surprise with its stunning originality.

Independent of an official release, ESKA's music has already created a buzz; receiving strong radio support from the likes of Gilles Peterson, who made the EP's title song his track of the week on his BBC 6 Music show. Lauren Laverne was quoted on her 6 Music show, after playing the lead single that she "loved it". Jamie Cullum, from BBC Radio 2 described 'Gatekeeper' as "an unbelievable track, that will be hard to beat in 2013" and BBC Radio London's Robert Elms recently featured a sensational live performance of 'She's in the Flowers'.

Having built an inimitable reputation as a writer and performer through collaborations with such legends of the game as Grace Jones, Cinematic Orchestra, Zero 7 and Bobby McFerrin together with performances in some of the world's most famous venues and festivals, it's time to discover ESKA's own unique sound in full force on her new EP. Co-produced with The Invisible's David Okumu with additional co-production on two tracks coming from electronic star Matthew Herbert, who has previously remixed tracks for Björk, R.E.M. and Yoko Ono, 'Gatekeeper' is sure to be unlike anything heard all year.

Prepare for the secret to be let out of the bag on November 20th with one of the year's most hotly anticipated releases. With the buzz surrounding the 'Gatekeeper' EP building to a roar, it's time to discover ESKA.

MF DOOM is given his flowers, plus appearances from MC Jada Imani and Stanley Ipkuss